Helping energy-hungry industries such as manufacturing scoop back and reuse vast volumes of waste water and heat is the goal of an ambitious new project at Brunel University London.

Europe’s Horizon 2020 fund to equip Europe to compete on the world stage is pouring almost €10.6 million into the iWAYS project, short for Innovative Water Recovery solutions.

The technology, which promises to save billions across several sectors, will first be perfected for Europe’s most energy-intensive industries — chemicals, steel and ceramics — where it will have the biggest impact.

“Industries release one-third of the global greenhouse gas emissions, of which 70% stem from heat generation,” said scientific director, Professor Hussam Jouhara (pictured). “One way to reduce the environmental footprint is to recover the generated heat and reuse it in other industrial processes”.

The new industrial scale heat and waste recycling technologies are forecast to cut water use by 30% to 64% and reuse water and heat from humid gases by 30%. They will also sift out acids and tiny particles from run-off gases to cut environmental pollution.

Until now, recycling waste heat has been a challenge in industry because of the huge costs to build and maintain the technology and the low return on investment. But Prof Jouhara’s Heat Pipe Heat Exchange systems drastically cut manufacturing cost and time, making it a safe, efficient and affordable option for any heat source. 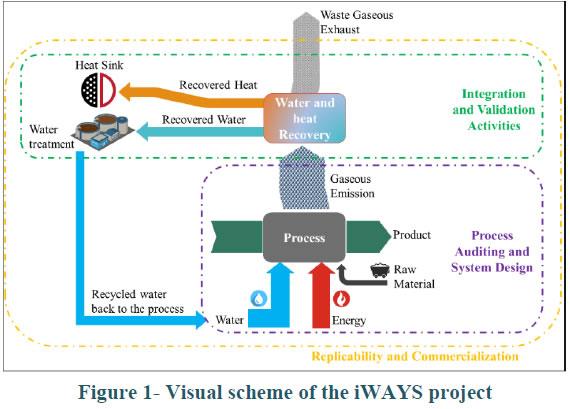 The funding, €875,000 of which goes to Brunel, iWAYS' technical lead comes as the European Union unveiled the biggest green stimulus package in history – the European Green Deal. The deal, to make Europe carbon neutral by 2050, puts green innovation at the top of the EU’s economic recovery plans from Covid-19. And iWAYS’ plan to gear up Europe’s most energy-intensive industries to reach near-zero waste water, cut exhaust gases and reuse waste heat and water fits its strategy.

Spanning nine European countries and bringing in 18 universities and organisations, the four-year project starts officially in December. Engineers will develop a spectrum of cost-effective technologies that boost productivity and help towards the Green Deal goal.

“The project intends to transform white plumes from industry´s chimneys – starting from ceramics, chemicals and steel – into a source of water and energy,” said iWAYS co-ordinator, Prof Luca Montorsi at Italy’s University of Modena and Reggio Emilia.