Ahead of the long-awaited Energy White Paper and interim report of the Treasury’s Net Zero Review this autumn, a new report from npower Business Solutions has found that manufacturers are calling for additional support from the government if they are to be expected to help fund the UK’s low-carbon transition.

The report, titled ‘Your Business Blueprint - The road to Net Zero' which will be submitted to the Department for Business, Energy & Industrial Strategy (BEIS). saw npower Business Solutions consult with nearly 100 businesses across various sectors, including 25 from manufacturing, to gauge views on the net zero target, where they are in their own net zero journey, who should ‘foot the bill’, and the support they want to see from the government to aid the transition.

Encouragingly, the majority of manufacturers – 66% - believe that achieving net zero emissions by 2050 is a realistic target and, when asked whether they had a clear plan to hit net zero emissions ahead of 2050, a similar number (63%) agreed.

An overwhelming majority - 80% - also believe that their organisation would benefit from the changes required during the net zero transition, with the main reason being greater operational long-term resiliency through saving money and reducing carbon emissions.

However, concerns were raised about how the net zero transition would be funded, with 47% of manufacturing respondents worried about the potential economic impact on their business. There was also a difference in opinion as to who should fund the majority of the transition - when asked to rank who should bear the cost, respondents were split between the government and large energy intensive industries, with financial institutions also ranking highly.

That said, there was an acknowledgement that there would be an obligation on businesses in the sector to contribute to the net zero ambition. Two thirds of manufacturers felt this needed to be via new government incentives to invest in either renewable technologies or flexibility to give businesses the opportunity to change their demand, generate their own energy and support the grid.

One quarter of manufacturers (26%) also recognised that there would be some level of general taxation, while a third (33%) believed it should form part of their existing climate obligations. 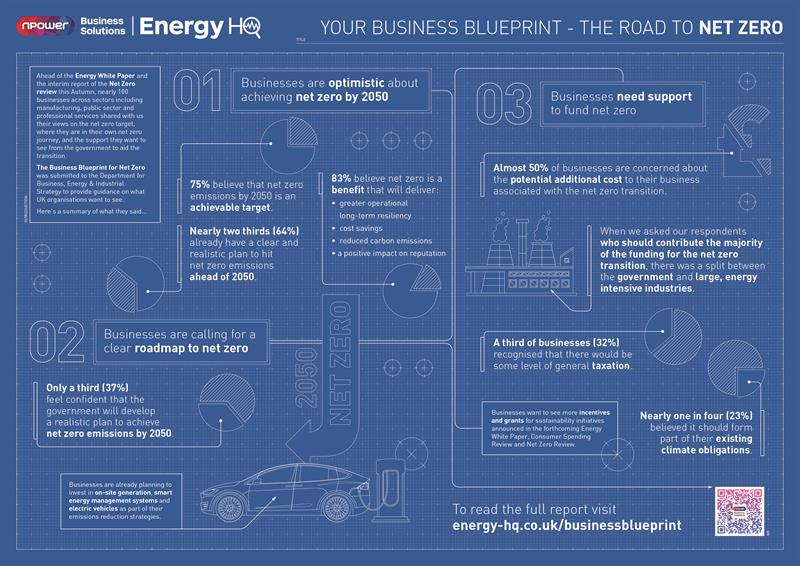 Anthony Ainsworth, Chief Operating Officer, I&C, comments: “The initial announcements from the government this summer to improve energy efficiency in homes and public buildings were a promising start, but - at the moment at least - they lack any major net zero stimulus for businesses, particularly in energy intensive sectors like manufacturing.

“At the time, we released our own insight, which showed that 90% of businesses backed a green recovery plan and 85% believed that organisations with a serious commitment to sustainability should be prioritised for post-Covid-19 government support.

“This report takes this a step further, and asked respondents whether they believed their business would benefit from the changes required during the net zero transition - it shows that a huge number felt that they would.

“However, the message coming through, loud and clear, from this consultation is that more is needed to support the manufacturing community. As manufacturers have such a crucial role to play in the net zero transition, it is important that their voices are heard. That is why we will submit this report to BEIS to provide guidance on what UK organisations want to see in terms of incentives and mandates to enable them to effectively plan for a cleaner, greener and more sustainable future.

“There is a real willingness from manufacturing and wider business to embrace net zero - they just need the policy clarity and additional support to help them achieve it.”

The report - Your Business Blueprint - The road to Net Zero for Manufacturing - can be downloaded at www.energy-hq.co.uk/businessblueprint