Upgrading software can lead to costly and time-consuming delays - but what if there was a better way?

It’s a common problem facing anyone using manufacturing IT systems: regular, time-consuming upgrades, often disrupting production for hours – or days – at a time. This comes at a real cost to the business: more than half of all manufacturing ERP implementations in the past 20 years have caused major delays costing as much as three times the cost of the software itself.

But what if there was a better way? Lovis EOS hopes to provide just that. After finding success in his native Mexico, as well as in markets across the world, the company’s founder, Rafael Funes, is looking to break into the UK market with a software solution that requires no lengthy updates.

“Many software implementations are more complex than they need to be – almost like making it difficult keeps it interesting,” he says. “That may be the case for IT people, but it’s not for end users. We decided to simplify those processes for our customers. That led us to our main target: giving certainty over how a business is run, the information people use and evolving with new technologies.”

This complexity has held software back from advancing at the same rate as hardware. While microchips and the like have developed leaps and bounds, the software is struggling to catch up. “Because hardware is a physical ‘thing’, manufacturers have to make sure it works before selling it,” explains Funes. “Recalling it and fixing it costs a lot. With software, it often seems like nothing happens – you send an email to your software provider, they send you an update file, you download it and carry on as normal.

“Why do companies have to go through a new software implementation every two years to move from version 5.0 to version 6.0 of their chosen software? Added to that, most major software providers stop their maintenance on previous versions, so companies are forced to upgrade knowing that it’ll be a major disruption to the business.” 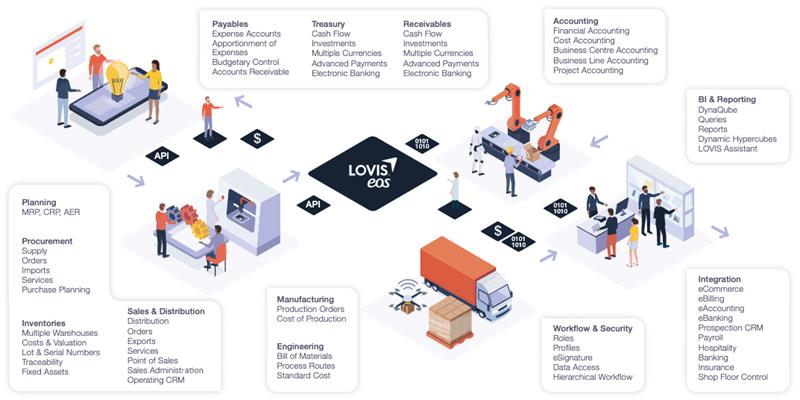 Lovis EOS is an all-in-one enterprise software solution that will, Funes says, transform companies that rely on Excel spreadsheets – what he calls “Excell-ent” organisations.

“Many companies just want to know about functionality, not the ins and outs of the technical specification. There are real business reasons for wanting to have the best, and easiest to use, software. Will a company running on Excel understand the complexities of running a business during the current economic climate, or continue to struggle through uncertainty? Do they want to get rid of the limitations that are obscuring the organisation? It’s vital to understand what you are losing by not having things in a specific way, and what can you win in addition to that.”

Too often, when things start to go wrong, the first thing a manufacturer will look at is the process. In actual fact, the problem often lies with poor software. Funes describes a triangle between process, people and technology, and achieving a perfect balance between all three is the secret to getting a company to the sweet spot in terms of profitability, productivity and wellbeing.

“The problem, probably originated by more complex software, is that people stop seeing technology as a tool; they see it as a problem,” says Funes. “With Lovis EOS, we reduce those problems. During implementation, because we can save companies time, money and effort in reimplementing software, we look to train people properly and understand their business processes. That’s the best way to reduce effort, regain time and save money.”

The events of the pandemic have opened even the most cynical eyes to the benefits the right technology can bring to a business. Many of the common misconceptions around technology focus on the idea that people will lose their jobs to automation, when in reality the technology allows low-skilled workers to move into higher-skilled, more valuable roles.

The same applies to IT, explains Funes. “When new software comes in, people fear they will lose their job. That doesn’t happen. When someone isn’t doing something valuable for the company or doesn’t fit its culture, then fair enough, but when technology helps bring value, people can be upskilled into more enriching roles. Advancements in technology have shown how companies can do significantly more, and hire more people to be more productive. Investing in the right type of technology will help companies grow.”

All this means now is an ideal time to look at changing software providers.

“Manufacturers should seriously consider migrating to a software provider that ensures 10, 15 or even 20 years of smooth sailing instead of having to disrupt everything every couple of years,” says Funes. “And Lovis EOS is that provider.”